In August this year, BS5839-1:2017 was published – the Code of practice for design, installation, commissioning and maintenance of systems in non-domestic premises – a revision to the 2013 British standard.

According to the FIA, “The update brings with it many changes due to a research project called ‘Live investigations of false fire alarms’, which was carried out by the BRE in partnership with the FIA.”

False alarms from remotely monitored fire detection and fire alarm systems cost businesses and Fire and Rescue Services (FRSs) an estimated £1 billion a year in the UK. In the period 2011-2012, FRSs in Britain received 584,500 callouts; 53.4% of which were false alarms. As well as being a considerable drain on fire authority resources, this causes business disruptions (leading to a loss of productivity) and reduces the confidence of the general public in fire alarms.

It is this knowledge that led the BRE to undertake the research project. The resulting report contains findings which are quite interesting. Here’s a quick precis for you.

The image below shows a summary of the cause of false fire alarms, following the findings of the project. It is worth noting that poor maintenance, faults, damage, incorrect positioning and unsuitable equipment make up the false fire alarms causes reported below as ‘others’. 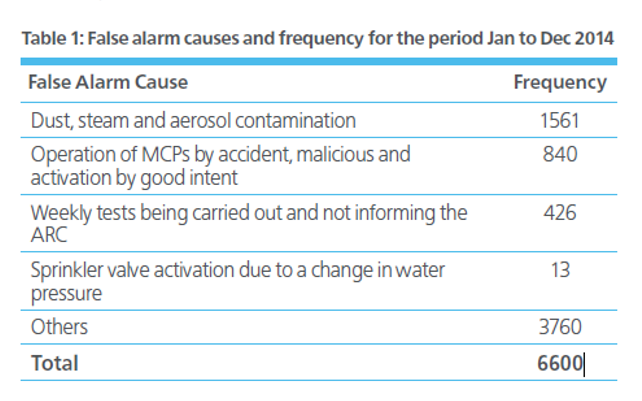 Many of these false alarms could be prevented by ensuring the fire alarm is adequately maintained and that it has been designed by an accredited company.

Optical smoke detectors were responsible for 74% of the live false alarms observed during the study, the majority of these due to cooking, dust, aerosol and steam. Observations were made that poor detector placement could cause false alarms (eg in front of a fan or window, above a radiator).

The report goes on to state that “Old detectors were considered responsible for 4.9% of the false alarms observed in data from Kings College London, which was examined in the previous BRE False Alarm study. Clearly the use of old detectors needs to be reviewed at the next revision of the BS 5839-1.”

The research found that 12.7% of false alarms were due to manual call points, either being activated by accident or as the result of malicious intent.

The report found that the “use of protective covers over approved manual call points (MCP) with adequate signage and closed-circuit television (CCTV) where required” could significantly reduce the false alarms.

It was also observed that some false alarms arise from accidentally trying to use a manual call point to release an electronic door, rather than the normal switch, so it’s worth considering this when deciding where to place the door release.

6.5% of false alarms were found to result from people testing their fire alarms without first putting them into test mode. This then leads to the ARC treating the activation as a real fire alarm.

This is where it gets interesting! The report says that “in 93% of cases someone was available to investigate false alarms, but in only 23% were there adequate false alarm procedures”.

After reading the report, it seems to us that many of the false alarms which occur could be prevented by having a reputable company maintain the fire alarm system and by improving the training of personnel responsible for fire safety. Whilst many organisations do take great care to ensure that their fire safety systems are adequate, and their personnel know how important it is to comply, there are still those out there who place slightly less importance on the subject of fire safety.

This is one of the reasons why, as a company, we hold free training events and take great care to ensure that the people using the fire alarms we install know how to use them and how to maintain them.

It is good that the British Standard has been updated to take account of these findings, but unless people in charge fully understand their obligations in these matters, then it won’t have the desired effect. If you are in a position where you feel you should improve your knowledge with regard to fire safety then we would encourage you to look into further training. At the end of the day, keeping people safe is of paramount importance to any organisation, and something which should not be left to chance. SS Systems hold training courses throughout the year.